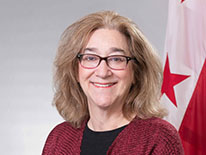 Ruth’s two children attended Janney Elementary, Deal Middle and Wilson Senior High. She was the chair of Deal’s Local School Restructuring Team, in 2009-2010, the first year that Deal enrolled 6th graders and a pivotal year in its transformation. Before that, she chaired Janney’s Spanish committee, which brought Spanish instruction to Janney.

Most recently (and currently), Ruth has worked as an education policy consultant, conducting evaluation and research projects in support of high academic standards and a curriculum rich in history-social studies, science, and the arts. Her article for “Knowledge at the Core,” highlighting the need to invigorate education in these subjects as part of Common Core implementation, can be found here. Her article, “Inside the Common Core Reading Tests” for Knowledge Matters about the subject knowledge that is embedded in PARCC and Smarter Balanced reading assessments, can be found here.

She currently serves on the Board of Trustees of the Core Knowledge Foundation, a national organization that advocates for a curriculum rich in history, geography, science, and the arts, starting at the youngest ages.

For many years, Ruth worked at the American Federation of Teachers, as the director of AFT’s educational issues department and as editor of American Educator, its quarterly magazine on educational issues. In those roles, she worked on many issues, including the importance of background knowledge and vocabulary for reading; testing and accountability; evidence-based education reform; teaching quality; how students learn; and fixing low-performing schools.

She lives in Ward 3 with her husband David Kusnet and two kids.