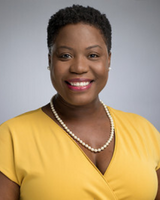 Bernice D. Butler is the Executive Director of the D.C. State Board of Education. She was appointed by the State Board in November 2022 and serves as the agency lead for the elected State Board. She is responsible for leading efforts to further policy and research under the State Board’s direction and manages the day-to-day operations of the agency and support staff.

Butler has had an extensive career in the public sector, with over 14 years of experience in local government and education advocacy. She most recently served as the Director of Network and Organizational Effectiveness at the Center on Budget and Policy Priorities, responsible for coordinating its state policy network, the State Priorities Partnership. Prior to that role, Butler was the Partnerships Manager at the Institute for Educational Leadership, where she coordinated the strategy to advance and support the growth and implementation of Community Schools across the country. She served as chief relationship manager for 78 community school initiatives addressing implementation and expansion questions and connecting local communities to national partners and resources.

Earlier in her career, Bernice served as a senior associate at the Data Quality Campaign, where she analyzed emerging state education policies and practices, convened national thought leaders, and worked with partner organizations to aid District leaders in using evidence to improve student outcomes. She also served as the program director of the Memphis Talent Dividend and Graduate Memphis, two action initiatives of Leadership Memphis.

Butler began her local government career in 2008 as a Capital City Fellow in Washington, D.C. where she completed rotations with the Department of Youth Rehabilitation Services, Department of Housing and Community Development, Homeland Security and Emergency Management, and the Office of the State Superintendent of Education. In 2012 Butler was selected as a White House Strong Cities, Strong Communities Fellow, where she worked as an advisor to the Mayor of Memphis, TN, A.C. Wharton, evaluating government operations and helping build a performance management system.

As a Georgia native, Butler earned her undergraduate degree in psychology with a minor in political science at Georgia State University. She earned her graduate degree in public administration, with a concentration in local government management from the University of Georgia’s School of Public and International Affairs. Bernice has served on the Georgia Supreme Court Committee on Justice for Children and Georgia’s Children and Youth Coordinating Council. She is a DC Education Policy Fellowship Program graduate and former Director of the DC Chapter of New Leaders Council. Butler is actively involved as a member of the Junior League of Washington and the National Forum for Black Public Administrators. She is a Ward 7 resident of Marshall Heights in the District, where she resides with her husband and daughter.

Rhoma Battle is the Budget and Operations Specialist for the State Board of Education (SBOE). He comes to the SBOE with 18 years of District government experience. Before coming to work for the District, Rhoma was a community activist and student intern. While completing his master’s degree in public policy at American University School of Public Affairs, Rhoma worked for the Anacostia Coordinating Council, the Marshall Heights Community Development Organization, and he served two years as President of the Penn Branch Citizens Civic Association in Southeast Washington, DC.

In District government, Rhoma took on the role of disbursements analyst for the DC Tuition Assistance Grant Program. Popularly known as DC TAG, Rhoma made payments of the DC TAG on behalf of students to colleges and universities throughout the United States. He then became an OCFO Budget Analyst for the DC State Education Office (now the Office of the State Superintendent of Education, OSSE), and was later hired by OSSE as a Fiscal Programs Analyst for Nutrition Services (now Health and Wellness). While at OSSE, Rhoma was responsible for budgeting, financial reports, procurements, and administrative services for Health and Wellness.

Kathleen Coughlin is the Education Standards Specialist for the D.C State Board of Education (SBOE). She works closely with the SBOE's Education Standards Committee on efforts to the develop, analyze, and revise D.C.'s statewide educational standards. Prior to joining the State Board in November 2022, Kathleen taught multilingual English learners in D.C. and France. As a teacher, she supported students in expanding their linguistic repertoires and discovering new ways to use English. Kathleen has also worked on linguistics and cognitive science research around the ways people learn grammar in a new language, access to interpretation services in schools, and the maintenance and preservation minoritized languages.

Kathleen is a native of Cincinnati, Ohio but now calls Ward 6 home. She holds a B.A. in Linguistics and an M.A. in Educational Transformation from Georgetown University. In her free time, Kathleen enjoys traveling, reading fantasy and science fiction, and teaching tricks to her cat, Mara.

Dr. Darren Fleischer is a Policy Analyst at the DC State Board of Education (SBOE).  Before moving to Washington D.C. in 2015, Darren spent nearly 10 years teaching middle and high school students in Japan, Ghana, as well as Florida, his home state. As a Floridian, Darren enjoyed beekeeping, scuba diving, and running an after-school cooking club with his middle school students. Darren previously served as a Legislative Fellow for a Florida Congressman, as well as an education policy intern at both the U.S. Department of Education (ED) and the National Education Association (NEA). His passion is to ensure that every student receives a world-class education and parents feel that they are part of the school and their child’s learning and development.

Darren holds a bachelor’s degree in sociology, a master’s degree in science education from Florida State University, and earned his doctorate of education (Ed.D.) in education policy at George Washington University. His dissertation focused on Education Support Professionals (e.g., bus drivers, food service workers, custodians, etc.) and how important they are to school climate, student engagement, and their experiences acting as caring adults and mentors to our community’s students. 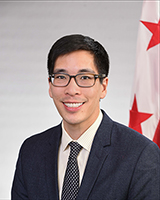 Alexander Jue is a Senior Policy Analyst at the D.C. State Board of Education (SBOE). Prior to joining the State Board, Alexander served as the Director of Policy & Research at a D.C.-based, national education advocacy organization whose mission is to ensure that all students regardless of background have access to a high-quality education. In that role, he was charged with providing strategic advice to the organization’s state-based teams as well as overseeing the production and creation of reports, memos, and one-pagers on a variety of education-based policies and topics. Alexander’s previous work also includes time as a strategic researcher with one of the nation’s largest labor unions, where he worked on eliminating inequities in the nation’s healthcare system.

Born and raised in Cleveland, OH, Alexander has lived in Washington, D.C. since 2011. He currently lives in Ward 3 with his wife and son. Alexander holds a bachelor’s degree in international relations and French from The College of Wooster.

Milayo Olufemi is the Press Secretary at the DC State Board of Education. Before joining the government, she was a multimedia journalist at WGN-TV in her hometown of Chicago, and later, at CNN’s Situation Room in DC. She began her federal government career as a Content Manager at the Centers for Disease Control in Atlanta during the Ebola outbreak in West Africa. She coordinated emergency communications to recruit and deploy individuals to serve at ground zero while raising global disease prevention awareness. As Deputy Press Secretary for the General Services Administration in Washington, DC, she managed press relations—gaining local and international news coverage for the agency’s programs and initiatives.

Milayo holds a bachelor’s degree in communications from DePaul University and is completing her master’s degree in international relations at Harvard University. She mentors disabled young women at Trinity Washington University in her free time, and sources college scholarships for at-risk children in Nigeria.

Caitlin Peng is the Program Associate at the DC State Board of Education. She joined the State Board full-time in October 2019 after serving as a Policy Fellow for the office from January to August 2019. Prior to moving to DC in 2016, Caitlin worked as a youth organizer at a grassroots non-profit organization for four years, developing and facilitating political education workshops. In high school, she volunteered as a student teacher in New York City public schools in addition to working with peers from across NYC to develop policy recommendations on school climate and bullying for the New York City Department of Education.

Caitlin holds a B.A. in Government with a minor in Education, Inquiry, and Justice (EDIJ) from Georgetown University.