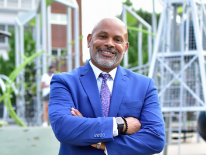 Jacque Patterson is a parent and committed community activist with more than 20 years of proven experience in promoting educational equity to achieve better academic outcomes for all DC students. As a proud Ward 8 resident, Jacque is well aware of the inequities that exist in public education and believes a student’s zip code should not determine the quality of the education they receive.

Since moving to DC as a single father in 1995, Jacque has been a tireless advocate and dedicated member of his community. He was elected by his neighbors to serve as their representative to Advisory Neighborhood Commission 8B in 2000 and served five terms. The following year, he was selected by former DC Mayor Anthony A. Williams as a Capital City Fellow, eventually serving as one of his Community Affairs Coordinators. During his time as a DC government employee, Jacque also worked at the Department of Human Services with families on Temporary Assistance for Needy Families (TANF). After leaving DC government, Jacque served in a leadership role at Martha’s Table, whose mission is to promote strong children and strong families by increasing access to quality education, healthy food, and family and community support.

Jacque is a veteran of our armed forces and enlisted in the United States Air Force in 1988, deploying to Desert Shield. He earned his bachelor’s in education from Southern Illinois University, an executive master’s in education leadership from Georgetown University and now a doctoral education candidate at The American University. He also served a school year on the Chancellor’s Parent Cabinet, was appointed to the State Board of Education’s Every Student Succeeds Act (ESSA) Task Force, and is currently on the Local School Advisory Team (LSAT) of his children’s school.

Jacque currently lives in the Shipley Terrace neighborhood in Ward 8 with his wife LaShandra and his two youngest children, Jacque Jr. and London.