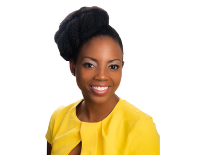 Eboni-Rose Thompson grew up in Ward 7 and attended both DC Public and public charter schools. She earned her degree from the University of Pennsylvania. After graduating, Eboni-Rose returned home to work for DC Public Schools (DCPS). As a DCPS employee, she was able to serve her neighborhood elementary school, Plummer Elementary, the school she attended from PreK through 5th grade.Serving as the Chair of the Ward 7 Education Council since 2012, Eboni-Rose has worked with families, educators, students, and community members to advocate for Ward 7 to receive our fair share of public education funding and resources. During her eight-year tenure, she helped:

Eboni-Rose was also elected to serve 3 terms as an ANC 7F commissioner. During that time, she worked with her ANC colleagues to:

She continues to find ways to give back to her community. For instance, she has: