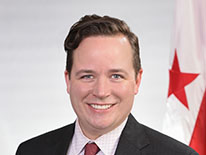 Jack Jacobson was elected in 2012 to the State Board of Education and was reelected in 2016 to serve Ward 2 families and residents. His work on the State Board has included shepherding through two of the District's waivers to "No Child Left Behind," drafting and approving comprehensive Health Education Standards, and ensuring the District continues its education reform work to raise educational achievement for the District's students of all ages.

Jack served as President of the State Board in 2015 and 2016, during which time the State Board approved credit flexibility regulations that, for the first time, will allow schools to implement competency-based education in mathematics and world language courses. During his tenure as President, the State Board also approved a State Diploma for students who receive a GED or successfully complete the NEDP program. His presidency also focused on streamlining State Board operations and increasing the transparency of the State Board's activities.

Education policy and high-quality public schools are Jack's true passion. He supports the District's efforts to improve school performance and served as a charter member of the DC Public Education Fund's Young Professionals Council. Jack is a fierce advocate for public schools across Ward 2, and fought alongside the community to keep Garrison Elementary and Francis-Stevens Educational Campus (Now School Without Walls at Francis-Stevens) open and thriving during the 2012 school consolidation process.

Prior to joining the State Board, he served five years on the Dupont Circle Advisory Neighborhood Commission, focusing his efforts on public safety and public space beautification.